BOOK REVIEW: Under the Cover of Light by Carole Engle Avriett 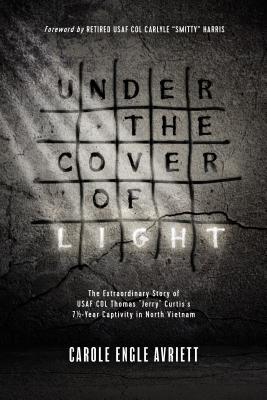 UNDER THE COVER OF LIGHT
The Extraordinary Story of USAF COL Thomas "Jerry" Curtis's 7 1/2-Year Captivity in North Vietnam
by Carole Engle Avriett
Tyndale, 2017
ISBN: 978-1-4964-2157-9
Source: publisher for review
All opinions expressed are solely my own.

In 1965, Col. Thomas "Jerry" Curtis's helicopter was shot down over North Vietnam. He was immediately captured and spent 71/2 years confined in a filthy 5′ x 7′ cell at the notorious Hanoi prison camp. Thousands of miles from home and unable to communicate with his wife and children, Jerry endured months of solitary confinement, suffocating heat, freezing cold, grueling physical and psychological torture, constant hunger, and unimaginable mental duress. And yet, time and again, the Light that darkness cannot overcome became his beacon of hope. Now, for the first time in print, Jerry shares the full story of his 2,703 days in captivity and what he learned about faith, hope, and the indomitable power of the human spirit.

There are some books that leave you pondering after you have read them.  This is one such book.  Admittedly this isn't always the easiest book to read.  Torture is never a pleasant topic and this book describes it plainly.  Those parts definitely made me flinch.  At the same time, the courage and determination of Jerry and his fellow prisoners was truly inspiring.  While all the prisoners had their breaking points, many still found the courage and the will to carry on through faith in God and/or their contact with each other.  Through tremendous hardships both physical and mental/emotional, Jerry turned to God to help him cope.  The tapping code he learned from other prisoners helped him stay in contact with other prisoners while he was in solitary confinement.  It still boggles my mind though that he spent 7 1/2 years moving from prison to prison, suffering physical torture, malnutrition, and emotional distress.  This is a powerful memoir that inspires with it's reminder of the power of faith in God and the love of family, friends, and country.  Highly recommended for those who can handle reading about the sometimes awful, sometimes wonderful things that people are capable of doing to each other.

Posted by Geo Librarian at 1:56 PM