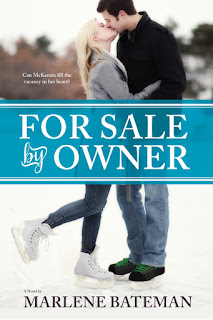 FOR SALE BY OWNER
by Marlene Bateman
Covenant Communications, 2016
ISBN: 978-1-62108-898-1
LDS Contemporary Fiction
Source: publisher for review
All opinions expressed are solely my own.
ABOUT THE BOOK
Mckenzie Forsberg is headed home. She's quit her big-city job to return to her roots in the small town of Lake Forest. Kenzi hopes to buy her childhood home from her brother, Tom, as a way of revisiting the peace and security she's been missing in her life. But soon she is shocked to discover that the house has a pending sale, and Tom won't budge from the sale—not even for his sister.

Handsome widower Jared Rawlins catches Kenzie's eye until she realizes that he's the one who is buying her house—but he can only close the deal if he sells his own house by Christmas Eve. Jared is more than a little interested in Kenzie but has second thoughts when it seems that she may be sabotaging the sale of his home.

Slippery feelings of animosity and distrust ensue, with both Jared and Kenzie denying the chemistry between them. But then an unexpected discovery about their connected past puts a new twist in the dynamic. Now, can they put their differences aside and come to terms on a relationship that could last forever?
MY REVIEW can be found here.
OTHER REVIEWS

“For Sale by Owner is a sweet, clean, romantic, holiday story that will warm you as surely as a cup of rich hot chocolate held between mittened hands and warm cookies straight from the oven (7 recipes included in book!) A tale of small sacrifices and lost love found and prayers answered. With a little bit of family drama thrown in for Christmas spice.” Reviewer & blogger, Diane Tolley.

“Wow, I really loved everything about this book! I loved the tenacious way that Kenzie goes about her life. I loved that there is a cute love story and also a cute story from the early years of Kenzie's life that ends up coming full circle before the book ends. This is a cute, clean, fun book that you won't want to put down, I know I didn't!” Reviewer & blogger, Cathy Jeppsen. 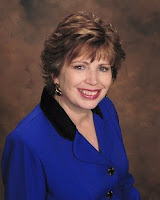 Marlene Bateman Sullivan was born in Salt Lake City, Utah and grew up in Sandy, Utah.  She graduated from the University of Utah with a Bachelor's degree in English. She is married to Kelly R. Sullivan and they live in North Salt Lake, Utah with their two dogs and four cats. Marlene has been published extensively in magazines and newspapers and wrote the best-selling romance/suspense novel, Light on Fire Island. She has written three other mysteries; Motive for Murder, A Death in the Family, and Crooked House.

Marlene has also written a number of LDS, non-fiction books:  Latter-day Saint Heroes and Heroines, And There Were Angels Among Them, Visit’s from Beyond the Veil, By the Ministering of Angels, Brigham’s Boys, Heroes of Faith, Gaze into Heaven; Near-death Experiences in Early Church History, and The Magnificent World of Spirits; Eyewitness Accounts of Where We Go When We Die.

For Sale by Owner is available at Deseret Book and Seagull Book. It can also be purchased online at:
Amazon
SeagullBook
GoodReads
Author website

“What made you decide to move to Lake Forest?” Kenzie asked.
“I’ve always loved it here,” Jared said. “It’s a beautiful area, and there’s a special atmosphere here. People are so friendly. I guess part of the reason I came is because I needed to go someplace new and kind of start over, you know?”
Kenzie did know. That was exactly what she was doing now. She’d gotten over Larry, but she needed to go someplace new and reinvent herself and her life.
“Now let me ask you,” Jared said. “What made you decide to come back?”
“A lot of reasons. I need a fresh start too. I’m tired of the hectic pace in Chicago.” Impulsively she added, “Also, I had to get away from my job at Midwest. A guy was causing some real problems for me—” She stopped. Their eyes met and lingered. Jared’s compassion was evident and the expression on his face kind. She felt so comfortable talking with him—as if they were kindred spirits. Something in her heart softened into a spreading pool, and she smiled at him.
Tearing open his packet of Oreo cookies., Jared took one and dunked it in his hot chocolate.
Kenzie frowned. “Figures. You’re a dunker.”
“And I bet you’re a twister.”
Snatching up a cookie, Kenzie twisted it open and took a bite of the creamy middle. “Ummm.”
Jared shuddered. “That’s wrong in so many ways.”
Picking up her mug and warming her fingers, Kenzie sipped her hot chocolate. “This is wonderful!”
“It’s a secret recipe—been in my family for generations.”
“Really?”
“No, but it sounds good, doesn’t it?”

Guest Post by Marlene Bateman, Author of For Sale by Owner

How to Improve Your Writing Style

There are many elements of good writing but perhaps one of the least understood is style. What is style? Style is not what you write but how you write. Voltaire said, “Every style that is not boring is a good one.”  But how do you improve something as nebulous as style? Over time, I’ve come up with some simple things that can enhance anyone’s writing style.

1.            The smaller the number of words you use to contain a thought or an image, the more impact it will have.  Let me give you an example: “Lee was a mean woman.” It’s always better to be more specific; “Lee was a shrew.” Another example; “He passed away early in the morning, and people all over America cried.” A much better way to say that is; “He died at dawn and the nation wept.” Do not put extra words in a sentence for the same reason you don’t tape two windshield wipers to the windshield of your car: they wouldn’t serve any purpose, and they would get in the way.
2.            Be wary of adverbs. Adverbs usually only crop up when you use a weak verb and need to boost it. You can use them, but be SURE they are needed. Most aren’t.
3.            Use strong verbs that are active, vivid, specific and familiar.  One example of this is; Buster ate his dog treats quickly. It’s much better to say; Buster gobbled his dog treats.  Don’t use weak general verbs like walk, cry, fall, and touch if the situation calls for plod, weep, collapse, and caress.
4.            Make tension fuel your plot. Without tension, there is no plot.  Remember, whenever the protagonist’s intention is denied, the effect is tension, which readers LOVE.

5.           Create tension through opposition.  The role of the antagonist is to thwart the intention of the protagonist. Don’t make things easy (and boring for your readers) for your protagonist!

6.            Make tension grow as opposition increases.  Tension is a result of a chain of cause and effect, which builds and produces conflict and tension. This is necessary to keep the story going.  Every time something happens, the stakes grow larger and the action snowballs.

7.            Make change the point of your story.  We expect events to affect the main character in such a way as to force a change in his/her personality.  Your main character should be a different person at the end of the book than he was at the beginning.

8.            When something happens, make sure it’s important.  Plot is your compass and gives you a general idea of the direction you’re headed. If you write something that is specifically related to the advancement of the plot, keep it. If not, chuck it.

9.            Make the causal look casual.  Everything in your writing has a reason, a cause that leads to an effect, which in turn becomes the next cause. For example; If a shotgun is necessary, show it well before it is needed. Make the appearance of the shotgun casual—show it in a way that the reader almost doesn’t notice. Then later, when a gun is called for, readers will remember seeing one earlier.

10.        Make sure your lead character performs the central action of the climax. Keep the main character on center stage with the action. And remember that your main character should act, not be acted upon.

11.        Show, don’t tell.  Showing means creating a picture for the reader.  You can say a person seemed impatient, but it’s better to show that by saying, “She looked at her watch constantly,” or have her ask, “Are you almost done?”
12.        Avoid clichés.  They’re tiresome.
13.        Appeal to the senses.  Bring your writing alive with the sounds, the smells, the flavors, and the peculiar tactile sensations that come from textures and temperature and motion.  Remind the reader that the world sparkles, roars, and sometimes stinks. The senses are touchstones for the reader.  Don’t say it was noisy at the baseball game.  Mention the crack of a bat, the whizzing of a fast ball, the roar of the crowd, and the heckling from the bleachers.
14.        Put emphatic words at the end.  Emphasis tends to flow to the end of a sentence, so if there is one word or phrase you want to say a little louder, put it at the end.  This is especially important when you are trying to be humorous.
15.        Keep it simple.  Write in a simple, direct, unpretentious way—with every sentence an arrow aimed at exactly what it means to say.  Remember you are trying to do one thing; tell a story.