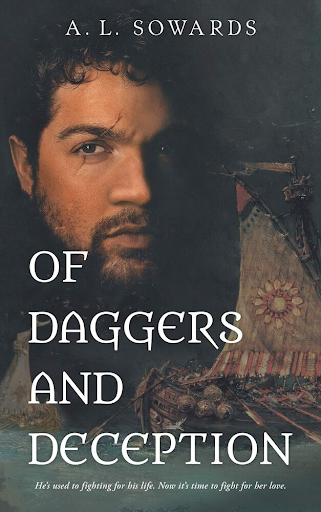 OF DAGGERS AND DECEPTION
by A.L. Sowards
Covenant Communications, 2021
ISBN: 978-1-52442-054-3
Source: eARC from publisher & purchased finished copy
Christian Historical Fiction, Medieval Adventure, Romance
All opinions expressed are solely my own.
ABOUT THE BOOK
After years as a soldier and mercenary, Rasheed has retired from battle to run the bathhouse in Thebes with his friends Gillen and Eudocia. The simple life suits them, so when Venetian strangers come to town looking to hire the renowned crew, their answer is no. But when one of his friends is abducted, Rasheed is left with no choice but to take up his weapons and join forces with the Venetians, including the beautiful and clever Cecilia, whose betrothed has also been seized by the unknown foe.
As the reluctant allies face ambushes and the looming threat of capture, Rasheed and Cecilia forge a surprising connection. But as the party races to rescue their friends, Rasheed discovers that nothing is as it seems. As his trust in Cecilia begins to waver, he realizes that in the end, they will both be forced to make a choice between love and duty.
ABOUT THE AUTHOR
A. L. Sowards is the author of multiple historical fiction novels, with settings spanning the globe from the fourteenth to twentieth centuries. Her stories have earned a Whitney Award, several Whitney Finalists positions, and a Readers’ Favorite Gold Medal. She enjoys hiking and swimming, usually manages to keep up with the laundry, and loves it when someone else cooks dinner. She currently lives in the beautiful state of Alaska with her husband, three children, and an ever-growing library.
AUTHOR LINKS:
Website
Instagram
Facebook
Newsletter
Goodreads
A. L. Sowards on Linktree

FIND THE BOOK
Goodreads
Amazon
Barnes and Noble
Deseret Book
Seagull Book
REVIEW
A.L. Sowards' books have always impressed me with their incredible characterizations, compelling plots, and amazing historical detail.  Of Daggers and Deception grabbed me from the first page and didn't let go.  It didn't hurt that I'd met the characters before in Of Swords and Shadows.  Knowing something about the characters and their pasts had me invested in the story from the beginning.  While I haven't read a lot of stories set in medieval times, the details regarding clothing and lifestyles rang true to me.  The inclusion of historical events and people also adds to the realism.  I appreciated the explanation the author includes at the end regarding fact and fiction and the challenges of researching a time where known details are few and far between.
The characters of this story stand out with their strengths and weaknesses.  Telling the story through Rasheed's eyes focuses the story on his thoughts and feelings.  This allowed the author to keep secrets and through in surprises throughout the book as Rasheed experienced them.  While I already cared about Rasheed, Gil, Eudocia, and Sebastie, it wasn't hard to learn to care about Cecelia and Aban as well.  The thoughts and feelings expressed by each character as challenges were faced and losses experienced gave the book depth.  The story progresses rapidly once the kidnappings take place with lots of action.  But there also plenty of thoughtful moments that allow the reader to get to know the characters better and empathize with the difficult choices they must make.
As Rasheed and his companions chase after their abducted friend numerous obstacles face them.  Turkish pirates, betrayal by supposed allies, and the pain of past injuries.  Rasheed and Cecilia's relationship grows as they get to know each other on the journey, but circumstances don't favor a long lasting relationship as one of the kidnap victims is her betrothed.  This compelling story line carries the book forward, but the other story lines make the book even more compelling as Rasheed and his friends struggle to survive while trying to rescue their friend.
A wonderfully complex and fascinating tale beautifully told.  I highly recommend this book to all who enjoy great writing, compelling plots, and great characters.
GIVEAWAY
a Rafflecopter giveaway 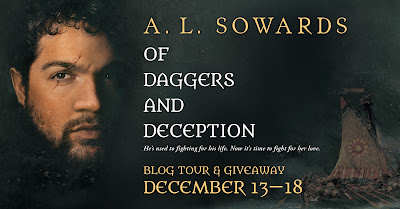 Posted by Geo Librarian at 5:36 PM