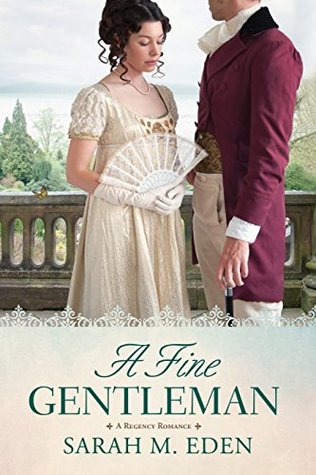 A FINE GENTLEMAN
A Regency Romance
by Sarah M. Eden
Covenant Communications, 2017
ISBN: 978-1-52440-210-5
Source: publisher for review
All opinions expressed are solely my own.

London barrister Jason Jonquil has spent his entire life working to establish his identity as a gentleman, a man of refinement like his father and brothers. But when fiery Spanish beauty Mariposa Thornton walks into his office, he finds himself losing his grasp on his dignified character. The woman is infuriating, pushing him to the limit of his legendary patience. However, her case seems simple enough—a small matter of inheritance. Or so he believes.

Once a well-born lady, Mariposa fought to survive the brutalities of Napoleon's war on Spain. She braved horrific perils and undertook dangerous missions on behalf of those fighting against the invading French army. But her greatest battle still lies ahead: after being separated from her family, Mariposa sets in motion a plan to reunite with her loved ones in England. To avoid drawing the attention of the French, Mariposa dons a carefully crafted persona to conceal her true purpose.

As Jason and Mariposa are drawn together by the case, they come to know the people beneath the masks they both wear. When the truth of Mariposa's quest is revealed, the couple is pulled into a mystery that will test the limits of their courage—and expose the true desire of their hearts.

SARAH M. EDEN read her first Jane Austen novel in elementary school and has been an Austen addict ever since. Fascinated by the English Regency era, Eden became a regular in that section of the reference department at her local library, where she painstakingly researched this extraordinary chapter in history. Eden is an award-winning author of short stories and was a Whitney Award finalist for her novels Seeking Persephone and Courting Miss Lancaster. Visit her at www.sarahmeden.com.

I am thrilled to be able to review A Fine Gentleman.  Sarah Eden has proven once again why she is one of my all time favorite authors.  I was excited to return to the Jonquil family.  I've loved every one of these books (Friend or Foe?,   ) and this one was no different.  It was fun to read Jason's romance as he faces off with a woman who is a match for him in intelligence and wit.  But things don't start off to well when Mariposa Thornton shows up in Jason's office and tricks him into helping her.  Pretending to be simple and vacuous, Mariposa desperately needs help to find her family before her spying past catches up to them.  But she doesn't dare tell the truth, and after her horrible experiences in war torn Spain, it was hard to blame her.  Unfortunately for her Jason doesn't appreciate her approach, especially once he realizes its all an act.  After some rather painful encounters, Jason realizes Mariposa does really need his help and with his father's training in being a gentleman ringing in his ear, he can't help but offer his help.  And as the two start to see the person behind the mask, feelings beyond irritation and guilt become involved.  It was especially fun to see characters from previous books show up, including one of my favorite characters, Jason's older brother, Philip.  The ongoing relationships between the Jonquil brothers is delightful to read about and always makes me smile, especially once Jason sees behind Philip's mask.

Sarah Eden has created a wonderfully enjoyable series with the Jonquils and I am excited to be able to read Stanley's story later this year.  If you enjoy regency romances with depth to them as well as delightful characters, then I highly recommend Sarah Eden's Jonquil Brothers series.