BLOG TOUR & Giveaway: The Spider and The Sparrow by A.L. Sowards 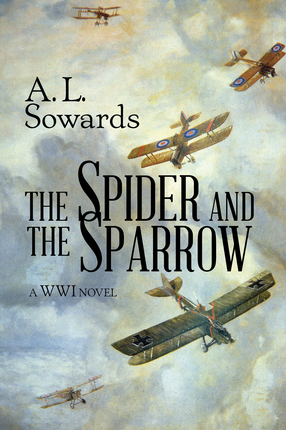 THE SPIDER AND THE SPARROW
by A.L. Sowards
Covenant Communications, 2016
ISBN: 978-1-68047-938-6
Romantic Thriller
Source: publisher for review
All opinions expressed are solely my own.

May 1915. After tragedy strikes during the Second Battle of Artois, Frenchman Julian Olivier will do anything to get out of the trenches. So when British Intelligence recruits him to spy behind enemy lines, he jumps at the opportunity. Just before he begins, however, he has a chance encounter with a young French woman who leaves his heart marked for the remainder of the war—even if he doesn't know her name.

Warren Flynn is a Canadian airborne hero, and dogfights with the Germans are all in a day's work. Second only to his love of flying is his fascination with Claire Donovan, the daughter of an American munition manufacturer living in Paris. Warren flies Julian into Germany and soon receives orders to post the Allies' newest operative—an attractive peasant woman named Evette—in Claire's home.

As a dangerous ring of spies and saboteurs threatens to turn the war against the Allies, Julian discovers goodness in his enemies' hearts. But even if he survives, will he ever be reunited with the woman whose memory he can't erase? Will Warren survive the war, and will Evette unearth the infiltrator in her own territory before it's too late?

After several books looking at the life of spies during World War II, Sowards goes back even farther to tackle spying during World War I.  As in all her books, the author takes the reader right down into the nitty-gritty details of the war, both the good and the bad.  The four main characters all face major challenges as they struggle to not only survive but maintain the relationships that are important to them.  Other than all the details, the other thing that I really appreciate about Sowards books is the look at both sides.  The dangers of war, both physical and emotional as well as ethical and moral come shining through, giving the reader something to think about long after the book is read.

Posted by Geo Librarian at 3:47 PM