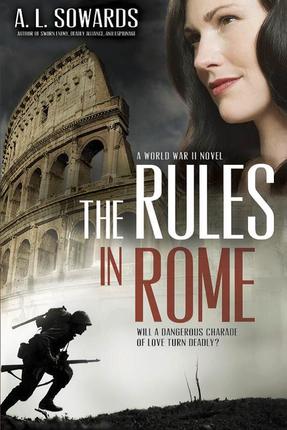 THE RULES OF ROME
by A.L. Soward
Covenant Communications, 2015
ISBN: 9781621088820
LDS Historical Fiction
Source: copy provided by publisher for review (Thanks!)
All opinions expressed are solely my own.


With Hitler's forces firmly entrenched in Europe, countless heroes seek to end the madman's reign. Bastien Ley is one of the best. Working in Italy for the Office of Strategic Services, he's been tasked with sabotaging German convoys. When his team kills an officer headed for Rome, the man's similarity to Bastien is undeniable, and seeing an opportunity to turn the tide of the war, Bastien makes a bold decision: he will assume the dead officer's identity. He become Dietrich, an Iron Cross-wearing German officer—an ideal position from which to infiltrate the Nazi ranks in Rome. Bastien's assignment becomes extremely stressful, and his superiors send him a reinforcement in the form of the lovely Gracie Begni, an intelligent, eager, and completely inexperienced radio operator.

With a gulf of resentment between them, these two agents must find a way to portray a couple in love. Soon their reluctant alliance becomes much more as Bastien and Gracie find themselves getting lost in their feeling for each other. But as they engage in battle against the deadliest foe the world has ever known, the pair quickly realizes their love may be doomed. As the Rome Gestapo threatens to destroy all they've worked for, will Bastien and Gracie survive their charade?

Sowards is a graduate of Moses Lake High School and Brigham Young University. She swam competitively for sixteen years, including while she was in college. She found it more entertaining to think of plot ideas while following the black line up and down the bottom of the pool than having a song in her head that restarted with every flip turn. Sowards currently lives along the Wasatch front with her amazing husband and her adorable twin toddlers. She loves hearing from readers at ALSowards.com or on Facebook or Goodreads.

In The Rules of Rome, Soward takes the reader on a thrilling ride through the Nazi occupation of Italy.  The story starts with a bang as Bastien Ley, an OSS agent working in Italy stumbles across a German officer who bares an uncanny resemblance to himself. Going undercover is a risky proposition but if it helps end the war before his brother joins up, he's willing to risk it.  However, when his boss sends him an inexperienced young agent to help, he is extremely reluctant to accept her presence.  Things get even more complicated when despite their initial dislike they start to care for each other.  Soward does a great job of creating an intriguing plot in a place that doesn't receive as much attention from WWII novelists.  The story begins quickly and continues on that way until the end.  The challenges of facing a deadly enemy as well as their own emotions makes Bastien and Gracie characters that I was more than happy to read about, the story also helped create a greater appreciation for those who put their lives on the line to help end that horrible war.

Posted by Geo Librarian at 9:21 AM