On Tour with Prism Book Tours
SEE MY REVIEW OF THIS AWESOME BOOK HERE.

In the backwater village of Callowford, Errol Stone's search for a drink is interrupted by a church messenger who arrives with urgent missives for the hermit priest in the hills. Desperate for coin, Errol volunteers to deliver them but soon finds himself hunted by deadly assassins. Forced to flee with the priest and a small band of travelers, Errol soon learns he's joined a quest that could change the fate of his kingdom.
Protected for millennia by the heirs of the first king, the kingdom's dynasty is near an end and a new king must be selected. As tension and danger mount, Errol must leave behind his drunkenness and grief, learn to fight, and come to know his God in order to survive a journey to discover his destiny.

Patrick Carr was born on an Air Force base in West Germany at the height of the cold war. He has been told this was not his fault. As an Air Force brat, he experienced a change in locale every three years until his father retired to Tennessee. Patrick saw more of the world on his own through a varied and somewhat eclectic education and work history. He graduated from Georgia Tech in 1984 and has worked as a draftsman at a nuclear plant, did design work for the Air Force, worked for a printing company, and consulted as an engineer. Patrick’s day gig for the last five years has been teaching high school math in Nashville, TN. He currently makes his home in Nashville with his wonderfully patient wife, Mary, and four sons he thinks are amazing: Patrick, Connor, Daniel, and Ethan. Sometime in the future he would like to be a jazz pianist. Patrick thinks writing about himself in the third person is kind of weird.

Awards: ACFW Genesis Competition 2010 Finalist for “A Cast of Stones” in Speculative Fiction.

When I first started the research for “A Cast of Stones” I’d planned on making the story an alternate-history of 14thcentury Europe. I purposely chose a time period that was prior to the Reformation because I couldn’t include that scope of chaos and conflict within the parameters of a reasonable word count. My writer’s group had coached me, rightly, that as a new author few publishers would be willing to let me run wild for anything over 150k words.

I later rejected the idea of an alternate history, but I kept quite a bit of the parameters of the time period. One of those was to use a powerful, somewhat monolithic church. I put a fair amount of research into the organization of the Roman Catholic church at that point. There was a built in mythos there that I knew quite a few of my readers would connect with; the intrigue, the power struggles, and the efforts of individuals to change some of the doctrine.

For simplicity sake, I kept my church hierarchy to three levels (the Roman Catholic church is far more complicated). The archbenefice is the head, but operates more on the basis of a first-among-equals rather than as an absolute ruler. Beneath him are the rest of the benefices, men who are attached to a specific geographic region and oversee a number of parish priests. I decided to name the collection of benefices the judica. In Latin, judica means judge. So the catch phrase of the benefices became “Judica me Deas” which would be the equivalent of “Judge me, O Lord.”

International Entries: eCopy of A Cast of Stones 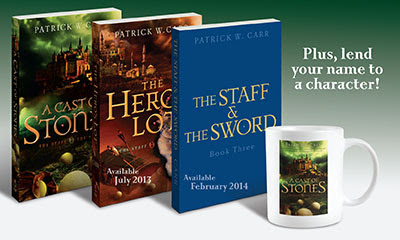 Open only to those who can legally enter. Winning Entry will be verified prior to prize being awarded. No purchase necessary. You must be 18 or older to enter or have your parent enter for you. The winner will be chosen by Rafflecopter and announced here as well as emailed and the winner will have 48 hours to respond or a new winner will be chosen. This giveaway is in no way associated with Facebook, Twitter, Rafflecopter or any other entity unless otherwise specified. The number of eligible entries received determines the odds of winning. Giveaway was organized by Burgandy Ice @ Colorimetry and sponsored by Bethany House & the author. VOID WHERE PROHIBITED BY LAW.

Only on this Tour... the author shares the Creation, his Goals, some Visuals and Excerpts on each of these mini-themes:


The Herbwomen of secret lore
The World of The Staff & the Sword
The Readers of the cast lots
The Watchmen, elite warriors
The Clergy of power