HISTORICAL FICTION : A Brilliant Night of Stars and Ice by Rebecca Connolly 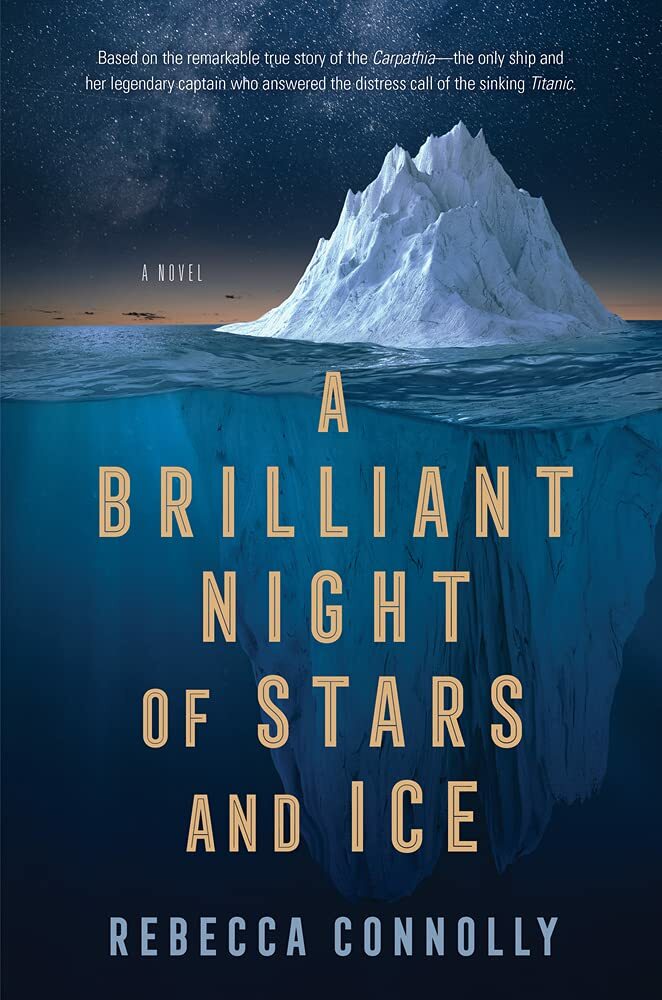 A BRILLIANT NIGHT OF STARS AND ICE
by Rebecca Connolly
Shadow Mountain, 2022
ISBN: 978-1-62972-992-3
Source: ARC from publisher for review/purchased final copy
All opinions expressed are solely my own.
Book cover & summary provided by Deseretbook.com & publisher.
ABOUT THE BOOK
Shortly after midnight on April 15, 1912, the captain of the Carpathia, Arthur Rostron, is awakened by a distress signal from the RMS Titanic, which has struck an iceberg on its maiden voyage. Though information is scarce, Rostron leaps into action, determined to answer the call for help. But the Carpathia is more than four hours away, and there are more questions than answers: Will his ship hold together if pushed to never-before-tested speeds? What if he also strikes an iceberg? And with the freezing temperatures, will there be any survivors by the time the Carpathia arrives?

Kate Connolly is excited to join her sister in America and proud to be traveling on the grand Titanic. As a third-class passenger, she is among the last to receive instruction and help after Titanic hits an iceberg. Despite the chaos of abandoning ship, Kate is able to reach the upper decks and manages to board a lifeboat, though after seeing the Titanic sink into the abyss and hearing the cries from the hundreds of people still in the water, she wonders if any rescue is even possible.

Told in alternating chapters from both Captain Rostron on the Carpathia and Kate Connolly on the Titanic, this historical novel is a compelling, heart-pounding account of two eyewitnesses to an epic disaster. Rostron's heroic and compassionate leadership, his methodical preparations for rescue, and his grit and determination to act honorably and selflessly to save lives and care for the survivors, sets the course for this awe-inspiring story.
REVIEW
The story of the Titanic is a well-known one.  Many books, both fiction and nonfiction, have been written about the disastrous sinking. Most of those books, at least the ones I've read, focus on the experience of the survivors on the Titanic itself.  This book also looks at the horrific experiences of the survivors.  What this one does that's different, is the focus on the captain and crew of the Carpathia, the ship that rescued the survivors.  In alternating chapters, Connolly shares with readers two different perspectives.  One perspective is that of Arthur Rostron, the captain of the Carpathia as he and his crew receive word of the Titanic's sinking and rush to help.  The other perspective is that of Kate Connolly, an Irish immigrant, who is traveling to the United States in the company of several friends.  The reader travels along with Kate and Captain Rostron as they face the tragedy and heartbreak of the disaster.  The author does an excellent job of helping the reader feel the terror, shock, and grief that afflicted those on the Titanic.  What makes the book especially powerful is the urgency that drove Captain Rostron and his crew as they worked feverishly to come to the aide of the Titanic.  I think what struck me most about this book, and it's the reason I liked it so much, is that is personifies what I love so much about survival or disaster stories: the courage and determination and selflessness that people so often exhibit in the face of difficult circumstances.  Connolly has done a fantastic job of sharing a fictionalized version of a true story focusing on real people and what they experienced over those few days.  Highly recommended for those who enjoy a story that inspires both tears and admiration.
Geo Librarian at 5:51 PM
Share